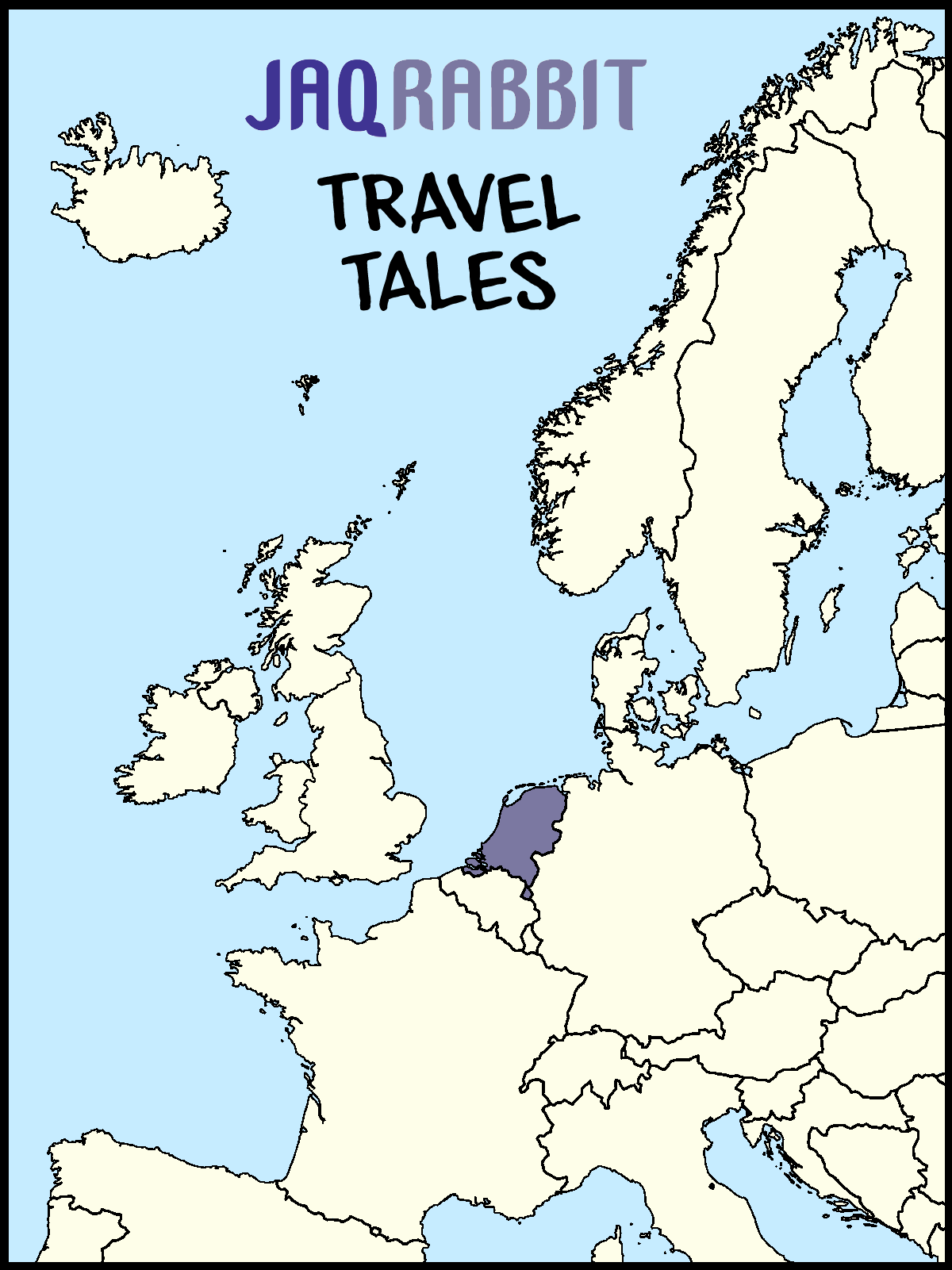 Riding the train into Amsterdam, I wasn’t sure what to expect.

On one hand, the Netherlands seemed like it should be familiar: I’d grown up in Dutch west Michigan, surrounded by towns named Holland and Zeeland. My neighbors had last names like Groendyk, Huizenga, De Jong, and Meijer, and I knew how to pronounce them all correctly. The annual Tulip Time festival was one of the area’s big tourist events.

On the other hand, the Dutch people who settled in Michigan weren’t the same sort of Dutch people who stayed behind. They were the ones who’d fled the Old Country for religious freedom… as in “the religious freedom to oppress those who don’t believe what they believe”. The Netherlands was becoming a hotbed of tolerance and permissiveness, and they wanted nothing to do with that.

I wanted everything to do with that.

Amsterdam Centraal Station was located right at the hub of the city, one of the great advantages of travel by rail instead of air. Just hop off the train and step outside, and you’re within walking distance of half the places a person might want to go: the Sexmuseum, Anne Frank Huis, the red-light district, the Royal Palace, and more canals and coffeeshops than you can shake a stick at.

One thing I wasn’t prepared for is how cosmopolitan Amsterdam is. I’d figured that my Dutchy upbringing would help me blend in, but there was no need for any help: anyone could blend in with the crowds here. I was reminded that Amsterdam was once the shipping capital of the world, and people from everywhere had settled here. No wonder the great grandparents of my racist neighbors had moved to Michigan! I’d picked out a hotel from my guidebook, based on three factors: price, location, and price. It was the Hotel Kabul, a “young budget hotel” a short walk from the station. As a solitary traveler, I didn’t have any trouble getting a bed… in a room shared by a dozen other travelers. This wasn’t my first shared-room accommodations – I’d stayed in youth hostels where four guys might bunk together – but it was by far the most roommates I’d had.

I stashed most of my belongings in one of the room’s lockers, but opted to keep my valuables – all of my money, my passport, my tickets – with me, and went out to explore. I’m not much of a sight-seer per se. Sure, I like a lot of the obvious tourist destinations, but I mostly just like to wander, and I repeatedly got myself lost in central Amsterdam.

I grabbed a quick dinner at one of the many automaats: restaurants that sell pre-made food from coin-operated slots in the wall: fully self-service and priced accordingly. I washed down my frikandel and fries with a few biers at a randomly-chosen bar. (Yes, I knew Amsterdam had legendary gay bars… but I wanted to ease my way into the debauchery. I had time.)

It wasn’t difficult to find a coffeeshop that sold cannabis: technically illegal, but no one in Amsterdam cares. I bought a nice big joint the size of my little finger, lit up, and continued my wandering as night fell. I had my wits about me more than an Copenhagen, but still I found myself parked on a curb in an alley. I don’t know how long I sat there while it got dark. But eventually I got to my feet and began to figure out how to get back to my hotel. Maybe I asked directions. Maybe I found it on a map. I don’t think I hired a cab, because that would be absurd. But I know I made it back to my room, because I remember what happened there later that night, after I started to come down.

Unlike proper youth hostels with a curfew, guests at the Hotel Kabul continued to come and go well into the night. But eventually the room was quiet and dark. Except for two dark-skinned teenagers – maybe a little older, they were both pretty small – over in the corner. They had a small battery-powered travel lamp. And they had their works. Drug tourists. Technically I was too, I suppose, but for me the drugs were just part of the attraction, not my main reason for coming to Amsterdam. I couldn’t understand what they were saying – or even identify what language it was – but they were loud enough that it woke me up. I rolled over in my bed to face them. “Can you keep it down?” I whispered. They both turned to face me, surprised. After a moment, they burst into giggles. One of them said something in his native language, and they both gestured for me to join them. I smiled, shook my head, and turned back to sleep.

But I couldn’t sleep. The two guys kept talking quietly to each other, just loud enough for me to strain to understand them. And I admit I was just annoyed enough with them to get my blood pumping. I was awake. I found my jeans on the floor, fished out the joint and my lighter, and took a hit. The guys apparently noticed this, and renewed their invitation to join them.

I wasn’t ready to try whatever they were having – I’m pretty sure it was heroin – but I accepted a can of beer from them, and I passed them my joint. Around this point I noticed that one of them was wearing nothing but an oversized t-shirt. The other was wearing just a pair of boxers. (I had been sleeping in my briefs.)

Now, smoking dope pretty much always gives me a stiffy. Due to my tiredness and alcohol consumption, I wasn’t exactly full-on, but there was no mistaking it. Likewise, boxer-boy had a half-inflated lump in his undies, and he caught me looking at it, giggling and looking away. Just then, t-shirt-boy shot up a dose of H, and leaned back on his bed. His shirt pulled upward, revealing his fully hard uncircumcised cock.

Boxer-boy and I both looked at it. I looked at boxer-boy. He turned to look at me, then nodded toward his friend’s cock. “Want it?” he whispered. So he knew a little English. With my left hand on T-shirt-boy’s cock, and my right hand on Boxer-boy’s I bobbed between them, first sucking one then sucking the other, back and forth. T-shirt boy came first, thrusting up and coughing as he jizzed into their air, which rained down onto his shirt. Meanwhile I was sucking Boxer-boy, whose breath accelerated as he saw his friend’s display. I intended to stop sucking and just beat him off, but my timing was off and he grabbed my head with both hands, and the next thing I knew my throat was filled with his jizz. What the hell: I sucked him dry.

“Knock it off!” hissed a voice from the darkness. Boxer-boy flicked off their lantern, and slipped under his sheets. I stumbled in the darkness back to my bed, and promptly passed out.

I woke around 9am, my boxers still a little wet with goo. Some of the other guests in the room had already left, others were getting dressed. T-shirt-boy and Boxer-boy were both unconscious in their corner. My quiet “goedemorgen” was met with a silent glare from one of them. And I decided that maybe my first order of business that day would be to get a private room.