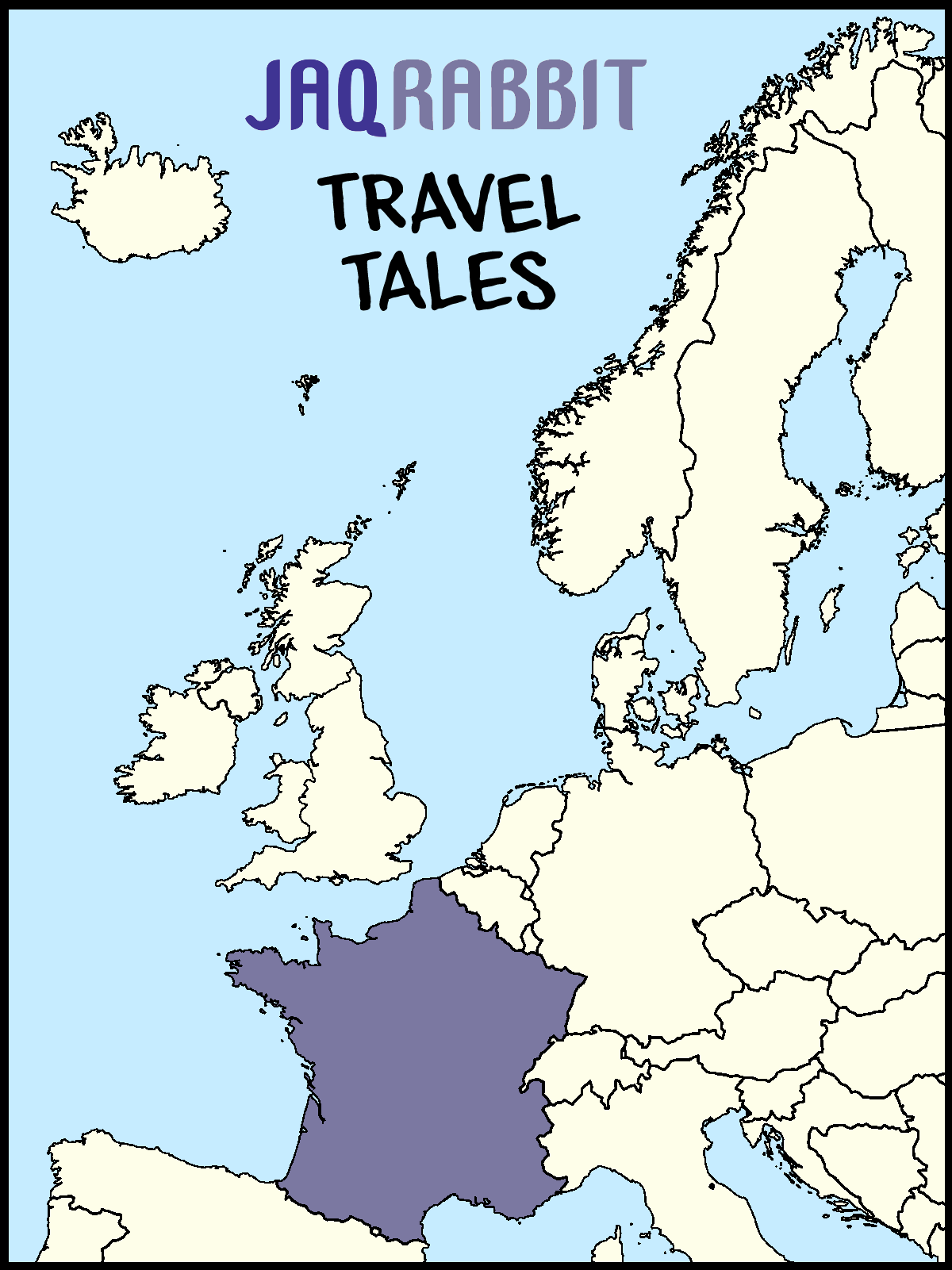 There was something of a mix-up at the hostel I’d booked for my time in Paris. I’d called in advance to reserve a bed, but they’d misunderstood me when I said what day I was going to arrive: they’d written me in for the following Tuesday, not this Tuesday. And they had nothing available for me this Tuesday. Except….

One of their rooms had a double bed and a daybed (which can be used as either a couch or a single bed). It was booked by a married couple, and since it was just the two of them, there was technically a bed available. As a general rule, hostels segregate shared rooms by gender, but book small private rooms to couples or families. They weren’t about to put some guy in with a married couple.

But I really didn’t want to rely upon bar tricks for housing again, and I was too low on remaining funds to book a proper hotel room. So I pleaded. And begged a little. They agreed to ask the couple. And they agreed to meet me, and decide. The front desk clerk let me use a bathroom to shave… I also put on a fresher t-shirt. The couple were in their late 20s, from Bordeaux, visiting Paris for a summer holiday. Chloé – I later learned – was from southwest France, and Kamel was born in Algiers. They looked me over, not judgmentally, but cautiously.

“Êtes-vous québécois?” Chloé guessed. Apparently the bit of French I’d picked up as a kid had a Canadian accent, so she put deux and deux together and figured I was from Quebec.

“Non. Je ne parle pas beaucoup de français.” It’s always helpful to know how to say “I don’t speak your language” in as many languages as possible. “Je suis Américain,” I apologized.

They immediately switched to English, and we continued the “interview”. To be honest, I flirted with them both, figuring that they’d be more likely to open their room to me if could get them attracted to me on a subconscious level. I also made a practical argument, assuring them that I wasn’t planning to spend much time in the room: I would probably be out late (so they could have it to themselves) but I would be very quiet when I got in (so I wouldn’t wake them up). Kamel seemed a little hesitant, but seemed to warm to the idea. Chloé seemed to be flirting back. After a few minutes, they agreed to the arrangement. My lodging secured, I went out to explore the City of Light. I visited the Louvre, where I got up close and personal with a lovely woman named Venus, and squinted from across the room at painting behind glass of a chick named Mona something.

I returned to the hostel a little after midnight. As I fumbled a little with the key to our room, I heard noises of people moving inside, but when I entered the room, Chloé and Kamel lay motionless in their bed. I left the light off, and quietly stripped down to my underwear before getting into the daybed.

As I settled in and prepared to sleep, I heard stirring and low whispers from across the room. Shortly I heard some repetitive motion. I wasn’t fooled: they’d been going at it when I interrupted them, and now they were trying to finish. I smiled in the darkness. I like to listen.

Chloé was not very good at keeping quiet. She almost hummed with an ongoing subvocal moan. From time to time I heard her breath catch. Kamel was mostly quiet, except for the occasional low growl. I, on the other hand, kept quiet, as I lay on my back and stroked my cock under the sheets.

Well, not entirely quiet. The rustle of my sheets apparently caught Chloé’s attention and she stopped. A few seconds later, the room light came on.

Chloé stood by the light switch, nude, of course. “What are you doing?” she demanded.

Kamel chuckled. He lay on his back on their bed, his wet and shiny cock standing at attention. “He’s doing what any young man would do if someone was putting on a show for him!”

“I’m sorry! I didn’t think you’d notice! Do you want me to go out, and come back later?”

“We can’t send him out like that,” Kamel said in my defense, gesturing at the tentpole holding up my bedsheet. He was finding the whole situation very comedic.

Chloé stood firm, and with a smile growing on her lips finally conceded, “No, I suppose we can’t.”

The couple then switched to French. I know a little conversational/tourist French, but couldn’t follow most of what they were saying. But he seemed to be suggesting an idea she was embarrassed by. The more she resisted, the more coaxing he gave her.

Finally Kamel addressed me: “She used to say she wanted to try a ménage à trois… you know what this means? With two men?”

“And he thinks this is our chance for it,” Chloé explained. “But you’re probably freaking out now, thinking we’re a couple of French perverts….”

“No, not at all!” I interjected. “You’re both super-sexy!” Kamel raised an eyebrow at this, surprised, not offended. “I’d love to!”

With some awkward discussion, they laid out ground rules. I was restricted to Chloé’s “back door”, and I had to use a condom. No kissing. And Kamel politely but firmly explained that I shouldn’t expect anything from him. He didn’t mind me participating, but there was no him-and-me to this. I didn’t argue, figuring that whatever I was getting was out of their generosity.

Chloé was to be “Lucky Pierre”, or whatever the term is for a woman in middle. Kamel lay on his back again, with Chloé straddling him, cowgirl style. They started going, while I wrapped my cock and slathered it with lube from my pack. It didn’t take them long to get into it, picking up more or less where they left off.

“You’ve done it there before?” I confirmed as I got into position behind her. I chuckled. “Mais oui! Beaucoup!” I proved it by demonstrating my best technique, lubing a finger and exploring her hole gently.

She half-giggled/half-moaned, as I slipped a second finger in, coaxing her to relax. The third finger elicited just a moan. “Go ahead and fuck me,” she encouraged.

I removed my fingers, and with a fresh glob of lube applied to the head of my cock, I pressed it against her. “Ready,” I advised her, and with a slow steady pressure I slid inside her.

As I pushed deeper, my balls bumped Kamel’s. He noticed the same as I did, and our eyes locked briefly before he looked away.

He began pushing and relaxing, and she moaned with each change of direction. I tried briefly to match his rhythm in reverse: pulling out as he thrust in, and vice versa. But I didn’t have the right leverage, and couldn’t keep up. I settled for a lazier pace, pushing deep inside her at the same time as Kamel’s every third stroke.

Chloé leaned in close to kiss Kamel ravenously. Between nips and licks and tongue-sucking, he whispered French dirty-talk to her. I closed my eyes, and imagined he was speaking to me. She was relaxing on me, so I dialed it up, fucking her harder and faster. She responded with appreciative groans.

Kamel responded by dialing it up himself. I wasn’t sure if he and I were competing or cooperating, but Chloé seemed to be getting the best of it either way, as she began to gasp and writhe between us.

Kamel and Chloé continued to gyrate beneath me. She began making quiet grunts, then her sphincter squeezed tight around me. It relaxed and I went full-steam ahead, as the waves of orgasm rippled thru her, clenching me with each one. A tidal wave welled up inside me, as I thrust load after load inside her.

As I pulled my cock (and its condom) out of Chloé I realized that Kamel, on the other hand, had not climaxed. Apparently the awkwardness of his position and me being in the way had cramped his style He continued trying to fuck Chloé, even as she squirmed, apparently satisfied. He was hard and engorged, but not getting anywhere with it.

Chloé gestured me to move and spoke to him quietly, then repositioned herself beside him. She took his cock in her hand, and stroked it slowly. He moaned in appreciation, and she began to lick up and down the shaft. She nibbled gently at it, teasing his head with her teeth.

I just watched, mesmerized, my cock reluctant to deflate. But Chloé gestured for me to join her. As I got into position with my face at his crotch, Kamel opened his mouth as if to object. I paused, to give him a chance to say something, but he smiled and closed it again. Chloé and I double-teamed him, both licking him side by side, or one swallowing his head while the other licked his balls. He watched us at first, but then leaned back and closed his eyes. Feeling bold, I tried to deep-throat him… but couldn’t. Instead I began to piston him with my best power-cocksucker technique. He groaned, then gasped, then moaned again, and his balls tightened, ready to shoot.

Where are my manners? I thought. I was just a guest in their country, in their room, in their bed. I pulled off him, gave Chloé a quick french kiss (breaking one last rule), and let her take over.

She played him like a fiddle, in the hands of a virtuoso. Rather than rushing him the rest of the way to climax, she slowed down the pace, teasing him with long, languorous slides up and down his shaft, then rubbing her teeth across the edge of his head. Cradling his balls in one hand, she gripped the shaft with her other, and sucked the tip of his cock. Then she picked up where I had left off.

The next day the hostel was able to get me a bed in regular shared room, for that night and the rest of my days in Paris. I didn’t take it.